I finally received the results of my Methylation Panel blood test results.  This test measures the function of a person's methylation cycle: the body's biochemical pathway that is responsible for detoxification, immune function, maintaining DNA, energy production, and many other critical functions.  All of this occurs at a cellular level.

Increasingly, the function of the methylation cycle is being considered as one of the candidates for the biomarker of ME/CFS.  So far, nearly every PWME who has reported their results on Phoenix Rising has apparently shown a defective methylation cycle, whereas a control group will not show any abnormalities.

The only lab in the United States (at least that I am aware of) that performs this blood test is Vitamin Diagnostics in New Jersey.  I obtained a doctor's order back in March, then ordered the test tube kit to be shipped to me by Vitamin Diagnostics.  From there, I had to find a lab that would draw the blood and ship it to New Jersey, which I finally did in July, 2012.  Now, I've finally received the results almost a year after the process began!

The results are very consistent with other PWME's on PR who have taken the same test.  There is no doubt about it, my methylation cycle is broken.

The next step is to get back on a methylation protocol.  I was on Fredd's Active B12 protocol for most of 2012, but I didn't notice much of a difference while I was on it.  So I think I'm going to switch to the late Rich Van Konyenberg's Simplified Methylation Protocol.  Maybe I will run this test again in another year and see if my numbers improve.

[3/5/13 edit:  Before I had a chance to start the Simplified Methylation Protocol I read Dr. Amy Yasko's book so now I'm going to do the full, un-simplified protocol.  I'm convinced this might be necessary for me.]

My results are posted below.  All numbers in a box are outside of the reference range--i.e. abnormal.  My main conclusion  comes from the first two numbers.  The too-high Glutathione (oxidized) means that my body is suffering from oxidative stress -- it simply cannot eliminate oxidized glutathione efficiently.  This is why, I believe, even small amounts of exercise exacerbate my symptoms.

The second number (Glutathione - reduced) means that I am not producing enough glutathione, which simply indicates that the methylation cycle is broken.

For a full article on how to interpret these results, see Rich VanK's article on Phoenix Rising. 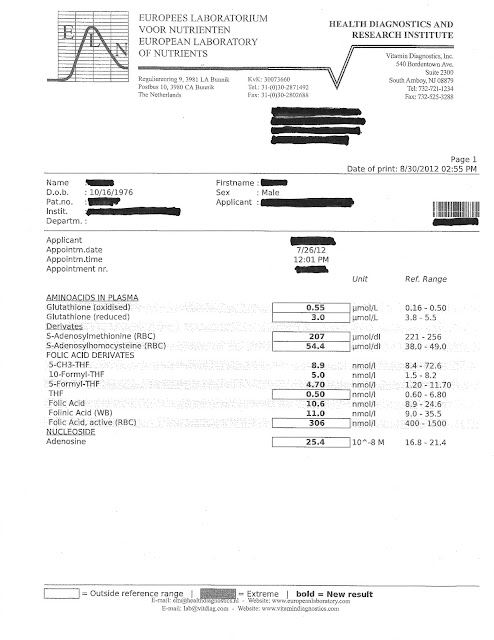 Email ThisBlogThis!Share to TwitterShare to FacebookShare to Pinterest
Labels: B12 protocol, Testing

DISCLAIMER: I am not a doctor and have no medical training. Nothing in this blog should be construed as medical advice. This blog simply recounts my personal experiences and, at times, summarizes research from other sources. I can't verify the accuracy of these other sources. Never rely on anything you read here in making your own medical decisions. Always consult a doctor.

What is Myalgic Encephalomyelitis (ME)?

The clinical definition of ME is complicated, and the symptoms are many. It is a "multi-system disorder" that affects a person's immune system, hormones, nervous system, and energy (at the cellular level). I prefer to explain, simply, that it feels like I have the flu. Every single day. This is an oversimplification, but it's often the best way to explain it to a healthy person.

Patrick W. Calvin
I came down with ME in June, 2011. I was diagnosed six months later. This blog tracks my progress; my successes and failures along the path to (hopefully) sustained remission. I live with my wife and two young daughters in Southern California.