You know you have ME/CFS when...

The Christmas gift you are most excited about is a pair of battery-heated socks. 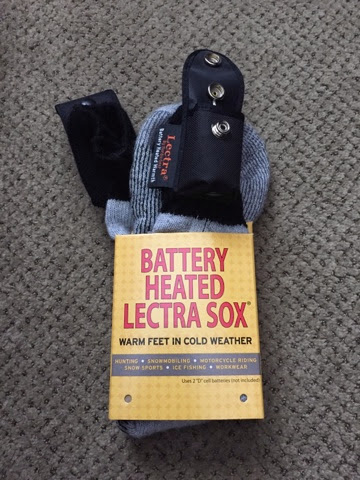 Now, almost two years later, I'm at a point where I'm ready to end the experimentation.  I wouldn't exactly call all the experiments a success, but I wouldn't call them failures either.  I was able to see some improvements implementing what Yasko calls "short cut" supplements, but not "long route" supplements.

(My full journey with methylation protocols can be read by clicking the "Nutrigenomics" tab in the right hand column.)

I don't think anybody could claim that I failed to put enough effort into the process.  I started with genetic testing through 23andMe, tested my hair and urine regularly, and worked with Yasko's web resources to tweak my supplement levels--all while trying to find the perfect combination of supplements to trigger the methylation cycle in just the right way.

I had some success with short cut supplements, including the use of a supplement called Phosphatidyl Serine Complex, or PS Complex, or PS/PC/PE. This supplement seemed to help reduce brain inflammation and reduce the dreaded "brain fog."  I still take this supplement and the other "short cut" supplements today.  I plan to continue taking them.

When it came to "long route" supplements, I could never quite get it right.  The cornerstone of long route supplements is vitamin B12.  Whenever I added Vitamin B12 to my regimen, I would experience increased levels of brain and nerve inflammation.  I would endure increased "brain fog" and hand, foot and leg numbness and uncoordination.  Each time this would occur, I would back off of B12 and start over, always going "low and slow" as Dr. Yasko recommends.  (This means starting with very low doses, and increasing very slowly).

My genetic results suggested that the "active" forms of B12 (methylcobalamin and adenosylcobolamin) would be problematic for me, so I concentrated on other forms.  But it seemed no matter how slowly I titrated and no matter what forms of B12 I used, I couldn't avoid feeling worse while taking B12.

I also don't think the problem was that I failed to stick with it long enough to move past initial start-up reactions.  After each failed attempt, I would take a new run at it.  For the most part, I would continue with each new B12 run for 3 to 4 months before backing off and trying again with a new combination.

So I've now come to the conclusion that, for unknown reasons, methylation protocols involving vitamin B12 simply aren't for me.  My body chemistry doesn't seem to want to have anything to do with vitamin B12, other than in the smallest doses found in regular multivitamins.

So I plan to stick with short cut supplements, but stop experimenting with long route supplements, at least for the foreseeable future.  I am changing doctors after the new year (moving on from Dr. W.), and my new doctor has experience guiding people through methylation protocols.  I won't rule out the possibility of returning to methylation protocols in the future, under the guidance of my new doctor.  But I think for now, we have other things to work on first.
Posted by Patrick W. Calvin at 2:24 PM 2 comments:

DISCLAIMER: I am not a doctor and have no medical training. Nothing in this blog should be construed as medical advice. This blog simply recounts my personal experiences and, at times, summarizes research from other sources. I can't verify the accuracy of these other sources. Never rely on anything you read here in making your own medical decisions. Always consult a doctor.

What is Myalgic Encephalomyelitis (ME)?

The clinical definition of ME is complicated, and the symptoms are many. It is a "multi-system disorder" that affects a person's immune system, hormones, nervous system, and energy (at the cellular level). I prefer to explain, simply, that it feels like I have the flu. Every single day. This is an oversimplification, but it's often the best way to explain it to a healthy person.

Patrick W. Calvin
I came down with ME in June, 2011. I was diagnosed six months later. This blog tracks my progress; my successes and failures along the path to (hopefully) sustained remission. I live with my wife and two young daughters in Southern California.